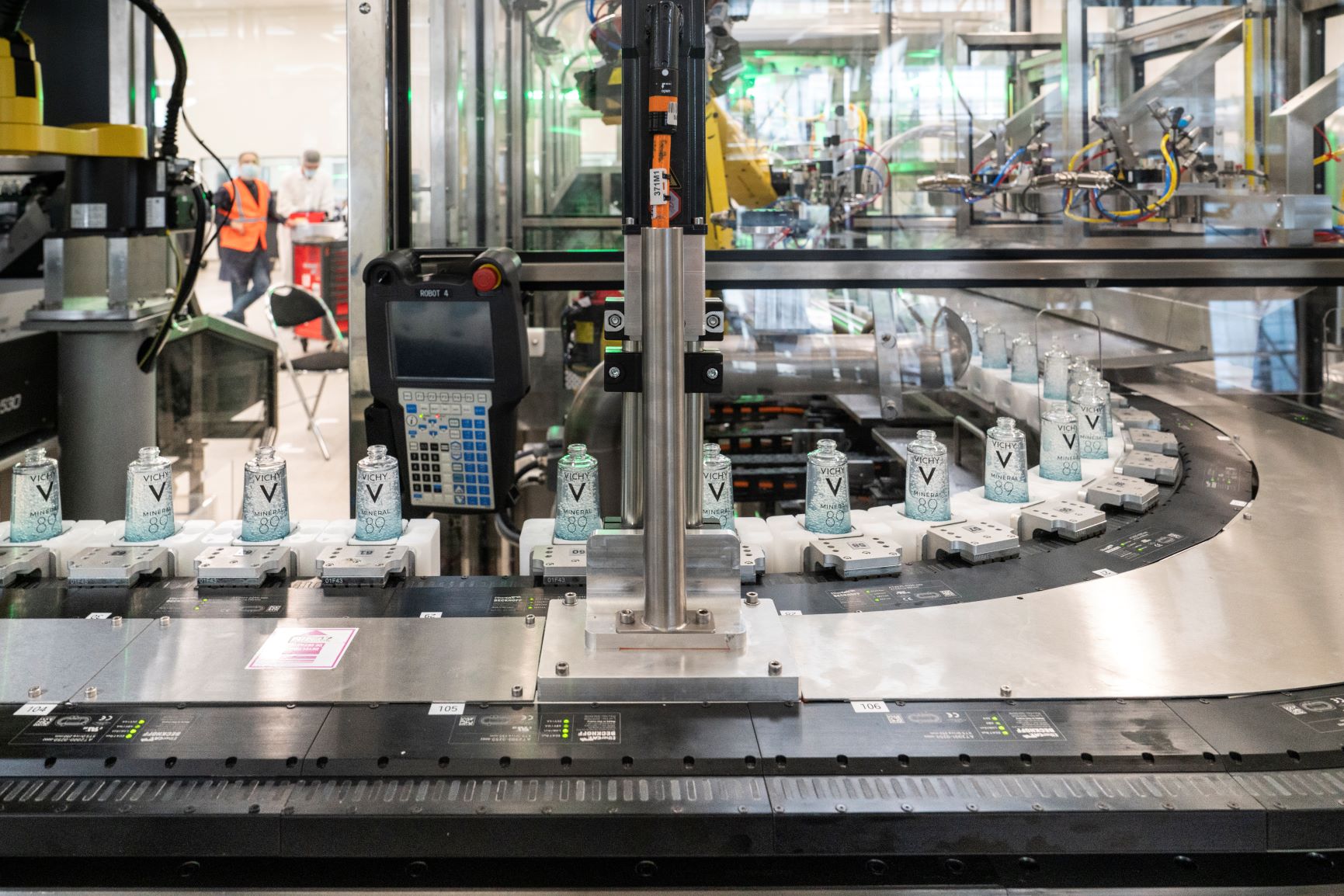 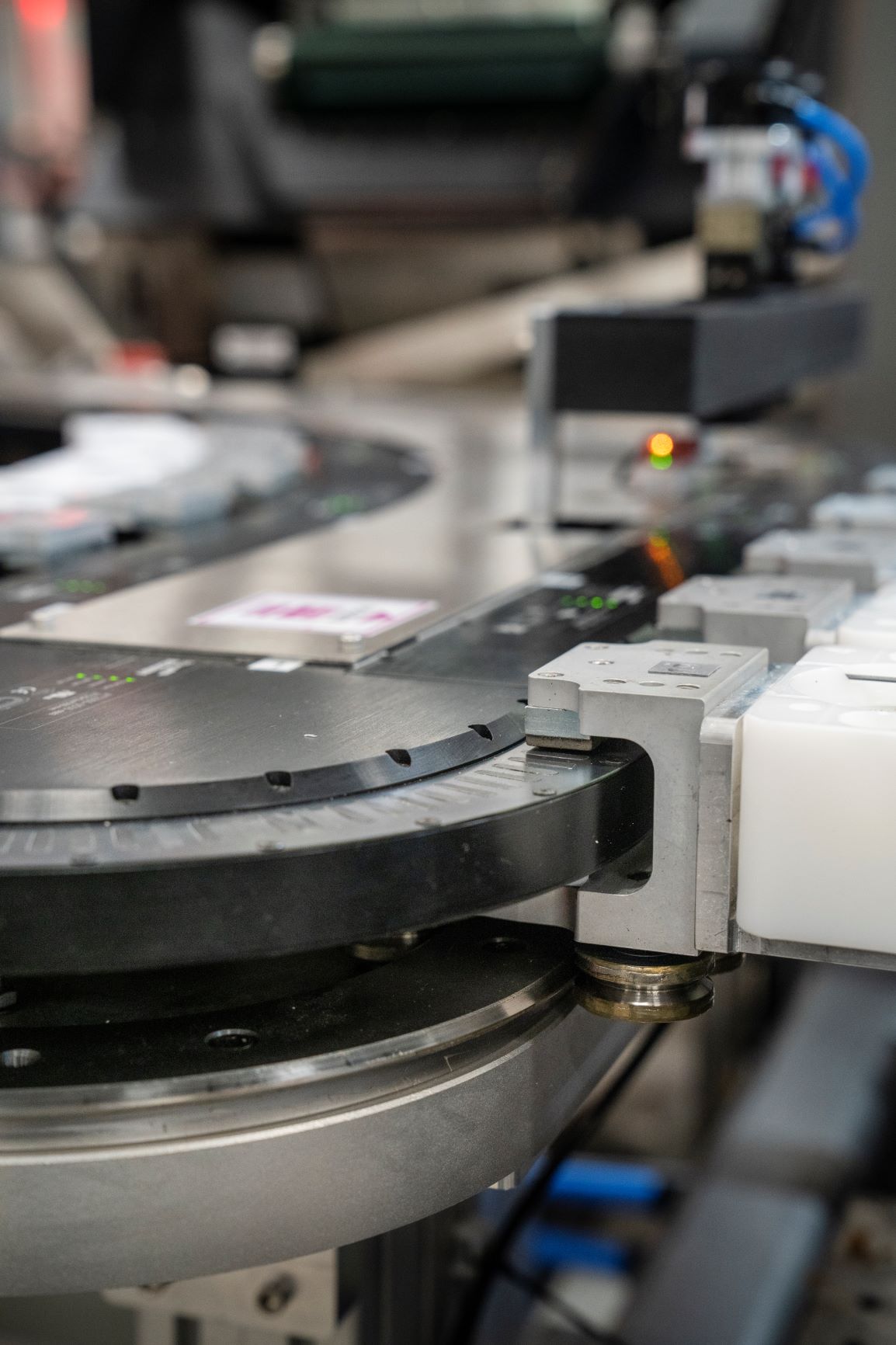 Small batch sizes and a competitive market characterize the cosmetic industry. To survive in this market, producers must strive for maximum efficiency, capitalising on flexible production methods. Top class engineering and the most modern drive and control methods play a major role in achieving this.

SECAD, a specialist machine building company in France, state: “The performance of a system is greater than the sum of the individual parts, it is the result of their interaction.” SECAD should know; the company regularly develops machines for giants of the cosmetics industry. “Every new project presents new challenges,” says Kevin Gomes, machine engineer for this specialist machine building company in Northern France. With this project, the company was faced with the task of merging six separate production lines including the unstacking, filling and labelling of cosmetic bottles in one single production line. An additional task was that of significantly reducing the throughput time. Handling small, light and fragile products, for example in the filling and labelling of cosmetic and pharmaceutical products, requires specialist machinery. Traditionally, conveyor belts with ‘puck handling’ are used to move products from one work station to the next. The puck, also called the product carrier, transport cup or carrier, guarantees stability and optimal position of the product. At first glance, this traditional solution looks the most sensible and economic option, but on closer inspection there are flaws to be found.

On classical product transport methods, individual work stations are connected by a series of conveyors. Consequently, a large plant footprint is required. Separate work cells and connecting conveyors need more space than a standardised system that facilitates a range of processes. Furthermore, additional equipment and machinery is needed to collect and move pucks between systems when they have moved through an individual station. These machines must also be serviced and maintained, adding to the maintenance costs. In the case of SECAD, several accumulation vessels were required to complete the transfer of pucks from system to system.

Another factor to consider with traditional setups is that a large number of pucks are required to achieve sufficient product throughput and allow continuous flow where processing times differ. A total of 300 pucks were being used in the existing processing plant. In the new cell, this quantity could be reduced by 76% to only 70 pucks, whilst simultaneously increasing productivity. The accumulation vessels would also no longer be required. “Simply by reducing the quantity of pucks in the system, significant savings can be made in terms of economy of scale.” commented SECAD´s client on the results.

A solid mechanical guidance is critical

These gains in terms of effectiveness could be achieved thanks to the Beckhoff eXtended Transport System (XTS) that combines rotary motors with a linear drive system. In this system, the movement of every single carriage – on top of which the pucks are placed – is controlled individually through so called “Movers”. A mover consists of the electronic drive element that is mounted onto a type of steel clamp from HepcoMotion. This in turn perfectly fits to the corresponding steel tracks, also from HepcoMotion, onto which the corresponding electronic parts are fitted. Because every single mover is controlled individually, the XTS makes it possible to combine asynchronous work processes into one single production line at great speeds. In addition, the individual control over the movers via the software makes it possible to add work stations or change the product format within a very short timeframe.

By switching to the XTS, SECAD were able to achieve a maximum speed of 4m/s with an acceleration of 40m/s2. In order to achieve the desired system life of more than five years on a system that would operate for 8 hours a day, 6 days a week with an 800g payload, the XTS system was integrated with a GFX 1-Trak Lite system from HepcoMotion. The fully modular GFX system comprises a steel sub structure with clothoid path track sections. The clothoid segments provide an optimal path for movers as they traverse the 180° turns in the system. The system incorporates precision ground slides and HepcoMotion’s patented, lightweight three-bearing mover, which provides stability around the full length of the system.

It is critical to have a solid mechanical guidance system that is capable of accommodating the loads and forces applied to the system as a result of the high accelerations and the stop-start motion profile. In the case of SECAD, the guide systems are housed deep within the cell. Minimal maintenance was therefore very important. Hepco’s GFX system offers the reliability required for this, with eccentric bearings that can be adjusted to take up preload that might develop in the system, and a removable section of slide to facilitate mover removal and replacement if necessary.

SECAD installed a system with 70 movers to replace the original system. Beckhoff’s linear motor modules are mounted to the system, with magnets mounted to each mover to provide drive. An encoder flag relays mover position to the motor module. On the SECAD system, all product processing is carried out on one side of the system, giving the potential for an additional series of work steps to be added on the unused side.

“Thanks to the optimal combination of Beckhoff’s XTS system and Hepco’s GFX, we were able to achieve our goal of substantially increasing throughput, achieving greater flexibility and, last but not least, realising quieter production,” said SECAD’s project managers at the conclusion of the project. This positive assessment is reflected by the end customer where the production line is up and running.